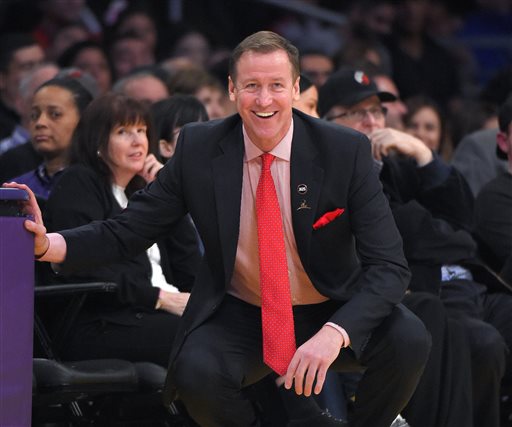 The Portland Trail Blazers will resume their pre-draft workouts on Tuesday of this week. They’ve had three days of workouts, with the most recent one on Saturday.

They have yet to release the participants for Tuesday’s workout.

But a draft workout wasn’t the only thing that happened in Blazers land over the weekend. Head coach Terry Stotts threw out the first pitch at this Sunday’s Mariners-Rays game. Surprise! The Mariners lost. But Stotts threw a strike.

Jason Quick of The Oregonian wrote a nice piece in the lead up to Stotts throwing out the first pitch with the coach reflecting on his childhood and his desire to throw out the first pitch at a ball game. Quick got Stotts to open up about trips with his father to ball parks as a kid.

The folks at Blazersedge.com have all of CJ McCollum’s interviews at the NBA Finals all in one place. CJ has been a busy busy man, shuttling between the Bay area and being in Portland for workouts, but he’s already getting a jump on his post-basketball career.

LaMarcus Aldridge has been back in the news recently. We learned last week that the house he was living in is now for sale by the owner of the house, Damon Stoudemire. As John Canzano of The Oregonian wrote, the sale isn’t exactly a smoking gun.  Aldridge leaving town after nine years and only one playoff series win is feasible enough without looking into real estate. This is not moving trucks at LeBron’s house in Miami and tracking the Instagram posts of his wife Savannah.

However, according to the folks at the Boston Celtics blog Red’s Army, Aldridge is spending some personal time over in Boston. This, like the sale of the house he was living in, is not really news. He’s on vacation and can do as he pleases. But as the folks at Red’s Army have done and others will do is compare this to Kevin Love’s visit to Boston last summer. Love’s trip was to “get a sense” for the City and this no doubt will feed the Boston media’s rumor mill that has been pushing the possibility of Aldridge and even Wesley Matthews in free agency.

Leaving for the Celtics would be a coup to say the least. But there is one big thing working in their favor that all but one other potential Aldridge suitor can’t say: come to the East and extend your career.

Aldridge will be able to coast to a few more extra All-Star games solely based off the fact that he will instantly be the best big man in the conference. The Celtics needed the Cavs to essentially concede games late in the season to make the playoffs but they did make it, they have young players with potential like Marcus Smart and a rising star on the bench in Brad Stevens.

Other than Cleveland, nothing is set in the East in the near future and you can easily make the sell that playing important games deep in the playoffs will be a much easier thing to accomplish in the East. The Western Conference even has the first two picks in the upcoming draft. There haven’t been any other updates on what Aldridge is up to and this is probably coming to light only because of a drought of real NBA news for all but two teams. Who knows what this Sasquatch-type photo of Aldridge at Logan Airport means, if it means anything at all.

Also, last week news broke that Aldridge’s agent and agent to many NBA stars Arn Tellem would be leaving the business to take job with the Detroit Pistons. That news carried much more weight around the league and a little bit more weight with the Blazers too. Portland’s President of Basketball Operations Neil Olshey used to work for Tellem before he joined the Clippers. It would be a bridge too far to say that this affects Portland’s ability to re-sign Aldridge but it certainly doesn’t seem like a positive development for the Blazers-side of negotiation.

Also, we had a new episode of the Blazer Banter podcast hit the streets last Friday with rapper Stupendous, fresh of the release of his Paid Time Off EP. Subscribe to the podcast on iTunes! And be sure to get Stu’s new album while you’re there too!