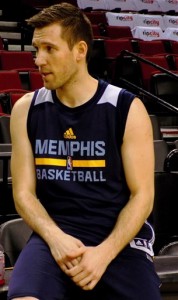 Memphis Grizzlies guard Beno Udrih looks on during an NBA basketball practice in Portland, Ore., Sunday, April 26, 2015. Udrih did not play in Game 3 of the Grizzlies playoff series against the Portland Trail Blazers because of a sprained ankle, but he said he plans to play on Monday for Game 4 in Portland. (AP Photo/Anne M. Peterson)