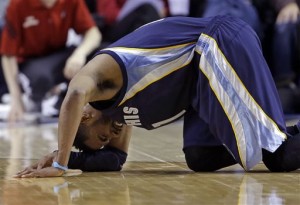 Memphis Grizzlies guard Mike Conley grimaces in pain on floor after a collision during the second half of Game 3 of a first-round NBA basketball playoff series against the Portland Trail Blazers in Portland, Ore., Saturday, April 25, 2015. Conley left the game and did not return. The Grizzlies won 115-109 to lead the series 3-0. (AP Photo/Don Ryan)