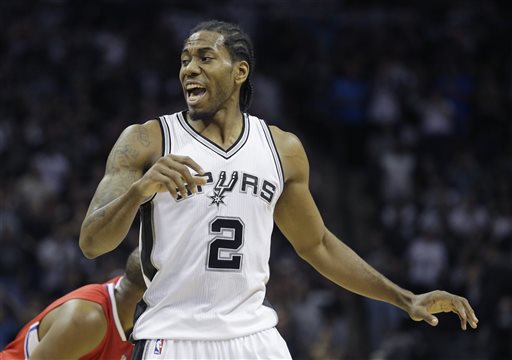 Adrian Wojnarowski of Yahoo! Sports published a column under the cover of night that has confirmed the worst fears of Trail Blazers’ fans heading into LaMarcus Aldridge’s free agency.

It is that the Spurs, because Kawhi Leonard’s emergence as one of the league’s best two-way players, have the best shot at stealing Aldridge away.

In a perfect scenario, the Spurs have a full understanding of the futures of Duncan, Ginobili and Danny Green when they walk into a 12:01 a.m. ET meeting on July 1 with Leonard and his agent, Brian Elfus, in Los Angeles. The Spurs will offer Leonard a full maximum contract extension, get a commitment and turn themselves toward prying Aldridge back to his Texas roots.

It is a testament to the regime of Portland general manager Neil Olshey, the commitment of owner Paul Allen, that the most credible threat to lose Aldridge comes out of San Antonio, the best franchise in sports. For everything Aldridge has been doing lately to sell people that he wants out of Portland, make no mistake: His forever changing moods will shift again and again, because that’s Aldridge’s nature. Portland can still pay Aldridge the most money, pitch him on Olshey’s franchise-building acumen and the chance to be rememembered as the greatest Blazer ever.

We knew this. The Mavericks roster is flawed and while Mark Cuban has been shown to open the checkbook, he’s also had several seasons of swinging and missing on high-risk free agency moves. Dallas is his hometown, but of all the teams that may pursue Aldridge, the Spurs have the best shot.

Going to New York makes no sense. Going to Los Angeles makes a little more sense only because Aldridge has a home in the Los Angeles area, like many NBA players. But he would be wasting his prime years on a rebuilding team.

The question for Aldridge is, as has always been the question, despite public statements to the contrary, does he turn down the opportunity to go down as the greatest Blazer ever or does he take less guaranteed money and team with the arguably the best two-way player in the Western Conference and arguably the best coach ever.

The Spurs have always been the biggest threat since Wojnarowski reported they would try to lure him earlier this season. The Blazers should rightfully be worried but there’s still a lot of time to get Aldridge back in the red and black.

Once again, nobody knows what Aldridge is truly thinking. And he’s fickle (see Team USA commitments followed by withdrawing from competition).

Aldridge “lives in the moment,” and the moment could always change his mind.  It’s a lot of money to leave on the table. And if he goes to San Antonio, “the face of the franchise,” he will not be. He wouldn’t even be the biggest Team Jordan athlete on his own team.

But the Spurs are the Spurs and that might be enough. They’ve been a threat for a while and the only credible one to steal Aldridge away. Portland has a lot going in their favor but it’s no guarantee he comes back, as its never been a guarantee.

And of course, there’s still some series left to go for Aldridge and the Blazers. You never know how the moment, the money and legacy, might swing him.

But no matter how this series goes there are a lot of moments between now and July 1.