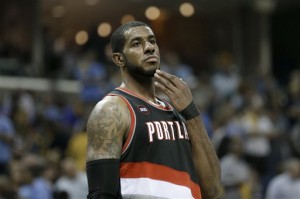 Portland Trail Blazers forward LaMarcus Aldridge waits for play to resume in the second half of Game 2 of an NBA basketball Western Conference playoff series against the Memphis Grizzlies Wednesday, April 22, 2015, in Memphis, Tenn. The Grizzlies won 97-82 and lead the series 2-0. (AP Photo/Mark Humphrey)