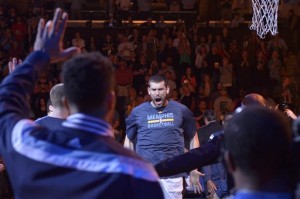 Memphis Grizzlies center Marc Gasol runs on to the court during player introductions before an NBA basketball game against the Indiana Pacers Wednesday, April 15, 2015, in Memphis, Tenn. (AP Photo/Brandon Dill)