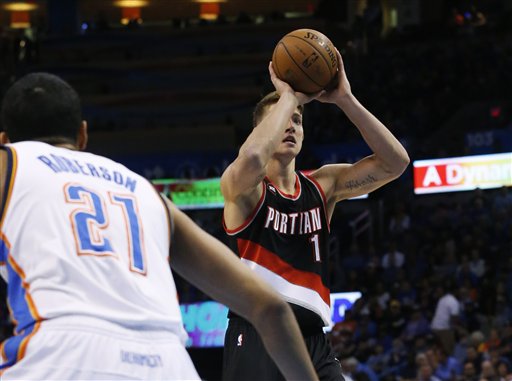 The NBA playoffs are only a few days away. Tonight will decide who the Trail Blazers will face in the first round. There are three games of interest for Trail Blazers fans. After the Clippers defeated the Suns last night they will finish no lower than the third seed and that they will not be Portland’s opponent in the first round. The three teams that the Blazers could play are the Spurs, Rockets and Grizzlies. Here’s a breakdown of possible scenarios. We’ll start first with Portland’s nightmare.

The Blazers play the Spurs in the first round if: The Spurs lose to the Pelicans tonight at 5PM, the Rockets win and the Grizzlies lose.

The Blazers play the Rockets if: The Spurs, Grizzlies and Rockets all win or all lose.

The Blazers play the Grizzlies if: The Spurs win and the Rockets lose, and they hold on against the Pacers at 6:30 which will be on ESPN.

In sum, a Grizzlies win would be good for the Blazers because it would mean that they would avoid the Spurs. But the Grizzlies are playing the Pacers who need to win to get into the playoffs. The team the Pacers are up against, Brooklyn, is playing host to the Orlando Magic. If the Magic pull the upset, the Pacers can rest their guys in the second half. Both the Grizzlies and Pacers will know what they have to do before the second half in Memphis starts, barring overtime anyway. All relevant games tip off at 5PM and the Memphis game is at 6:30.

Hat-tip to the guys at Blazersedge who produced this helpful flowchart of playoff scenarios.

Is Dorell Wright trying to make a playoff return? His instagram says so.  Blazers forward Dorell Wright posted a photo late last night of him using some kind of ultrasound treatment on his hand with the caption “trying to get back for these offs. Ya dig.”

Here’s the product website explaining the treatment as something that speeds up the body’s natural bone-healing process. The Blazers said the timeline for Wright’s return would be 4-6 weeks on April 3. We are in week two of that timeline. Who knows how much this treatment will help but it appears that Wright is trying his hardest to make it back before the playoffs end. If he sticks to the original timeline he likely won’t be back.

A return from Wright would be huge for the Blazers as he allows them to play true small ball line-ups.

Meyers Leonard has been fantastic as a floor spacer but he may not be able to guard smaller fours who can take the ball to the basket like a Jeff Green in a potential Memphis series. Leonard has also improved his verticality.

Getting Wright back would be a big boost and he was a huge part of their playoff win last year. He know what needs to be done and having him back would help.

Two more weeks would likely put the return at a game six or seven. But depending on the opponent, it could be over by then.

Leonard has greatly improved but he isn’t a true stretch four and his in his own words is more of a stretch-five. Grantland’s Zach Lowe included him as an honorable mention for Most Improved Player in his end of season awards column. CJ McCollum also got a mention.

However, having Wright back in the playoffs would help Portland.

Thankfully, after today, we no longer have to discuss as many “what-ifs” as Portland’s opponent will be decided this evening.

Also, please check out the latest episode of the Blazer Banter podcast with Connor Huchton! And subscribe on iTunes!

Hope you got your taxes done!