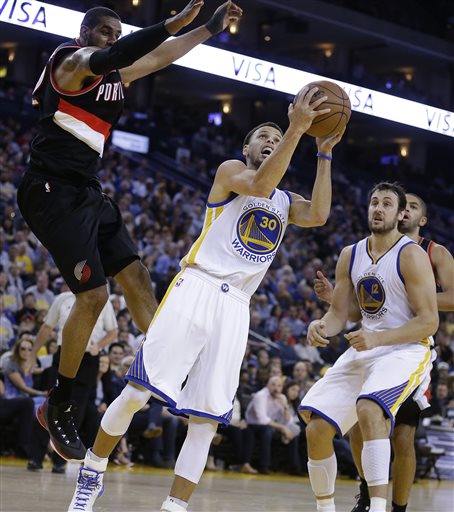 The Golden State Warriors notched their league-leading 64th victory with a 116-105 victory over the Portland Trail Blazers. The Blazers played the league’s best team admirably but the lost yet another rotation player to injury.

Arron Afflalo left the fourth quarter of Thursday’s highly entertaining game with what the Blazers are calling a right arm injury. He appeared to hurt the it on this play while trying to post-up Steph Curry. Afflalo will be re-evaluated on Friday when the team is back in Portland when they will presumably give a diagnosis and timeline to return.

(hat-tip to Blazersedge for the video)

Their ball movement was crisp and their defense was furious. The Blazers struggled to get things going in the early going but found their offense. Ironically, it was Afflalo got the Blazers going offensively after a struggle a bad shooting night Minnesota the night before. Afflalo got Portland going with some good jumpers and helped keep it close. Aldridge followed suit and the game was on.

Draymond Green did a good job but as the game progressed, the Warriors switched the match-ups more often by sticking Bogut on Aldridge. Aldridge still showed why the Blazers have chance against anybody in the league because of him. Portland’s roll players played well but Aldridge made the Warriors change everything they did. He had 27 points and he took three 3-pointers, making two.

He didn’t blow anybody away but the Warriors were definitely far from neutralizing him. And against anybody come playoff time, that will help. Though an extended absence from Afflalo would make any victory in the first round a downright miracle. It might even be that if he’s healthy.

Allen Crabbe played crucial minutes down the stretch. Though he did have an important turnover when the game was still close. But he will never be ready for those situations if he doesn’t play in those situations. For both he and McCollum, they need that time to be ready for when the stakes are higher in about 10 days.

Portland’s bench outplayed the Warriors in the first half, if not for the whole game.

CJ McCollum and Meyers Leonard continued to produce at high levels and Portland’s defense did a nice job of contesting almost everything the Warriors put up. The Blazers pushed the lead to 13 and Steve Kerr was forced to put Curry and Thompson back in the game.

The Warriors’ pace helped them push, but so did the Splash Brothers, they got back into the game in the blink of an eye.  Portland’s 13-point lead quickly became a 3-point deficit by halftime.

It looked as though the Warriors were going to run the Blazers, who had played the previous night, out of the building with a classic Warriors third quarter. But after the Warriors jumped out to an 11-point lead.

But Stotts countered the Warriors success by going small, inserting CJ McCollum into the game for Robin Lopez. The adjustment paid off as Portland was able to get quality shots. The Warriors were also missing a lot of shots that they hit but you can’t deny that the adjustment paid off. It forced Kerr to counter with Draymond Green at center.

The Blazers tied the game after three and it led to an exciting finish.

Portland kept with the smallball strategy for the duration of the game, playing with four guards and Robin Lopez in the middle to start the fourth quarter.

Each team landed combination after combination and each time the opponent answered back. It was as good of as game as you could see in game 79 of the regular season.

Curry was ridiculous and added yet another chapter to his MVP candidacy. James Harden has been fantastic but Curry is at the helm of one of the most dominant teams in recent memory. Especially after tonight, it will be that much more difficult to justify voting for Harden. He scored 45 points and took only three free-throws. Three! And they all game on an ill-advised foul from Lillard on Curry 3-pointer when the Blazers were only down by one.

The Afflalo injury takes precedence over anything. But the play of McCollum continues to be encouraging. Even Crabbe, who had a big turnover, had a positive showing on both ends, flashing some off the dribble game. If Afflalo is out, I’d bet to see more Crabbe. Because god knows watching Alonzo Gee dribble is a difficult experience.

The Blazers will comeback to the Northwest before playing their final regular season home game against the Utah Jazz who have Rudy Gobert, the one man on this earth that really gives Aldridge fits. The Jazz have had the league’s best defense and if Gordon Hayward plays, the Blazers are in for a tough one.