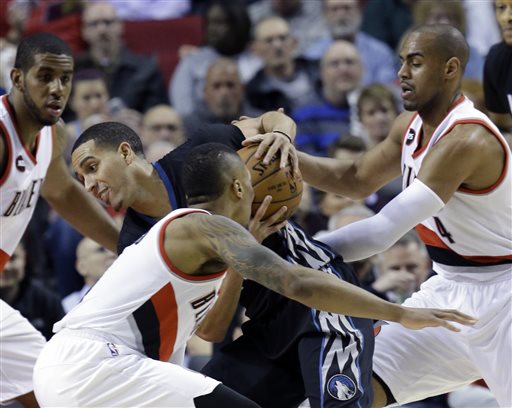 As the Blazers moved past the lowly Wolves, who probably with at this point the NBA had a mercy rule for the season, it was a pretty straight-forward affair.

The Wolves had no match-ups for LaMarcus Aldridge, no interior presence on the offensive end, and no hope at all of winning Wednesday’s game.

Before we get down to the nuts and bolts of the game, can we talk about Flip for a minute? Wait, I am in charge of this space. So, yes, let’s talk about this.

It’s 2015. Wiggins’ shooting stroke does not look broken. In fact, it has very good mechanics. How many perimeter players in the league, especially ones we consider superstars, are ones that don’t have a perimeter jump shot? Honestly? Who the hell is a considered an All-Star but barely shoots 3-pointers? Dwyane Wade and DeMar DeRozan are the only top perimeter scorers who attempt fewer than two 3-pointers per game.

I get it, Wiggins’ percentage hasn’t been very good. But how is he supposed to get good if he isn’t given the confidence to try it?

We’ve seen this experiment of having your head basketball decision maker and head coach be the same person fail too many times to believe that it works. Look around the league: Doc Rivers just traded another second round pick for his youngest son (that’s not actually true, but you’d believe it right?), Stan Van Gundy hamstrung his salary cap for the next few seasons by waiving Josh Smith instead of trying to find someone to take him in a trade.

Being the head basketball decision maker is hard enough as it is. How do owners keep buying into this scam these coaches sell them that they can do it all? Obviously, I’m not against them getting their money, and I commend them for getting top dollar. But you’d think that if you loved basketball enough to buy an NBA team you’d be wise to the fact coaching a team and putting one together are both extremely difficult.

I guess that lesson hasn’t been learned in Minnesota. Hopefully their fans and Andrew Wiggins don’t have to pay for it.

But back to the Blazers. After all the posturing all season about not resting guys, Terry Stotts finally decided to leave LaMarcus Aldridge, Nicolas Batum and Chris Kaman at home. He said that those days were meant to rest and he thought the trip would be hard.

Stotts has often referenced the fact that a young Tim Duncan nearly 40 minutes a game, which he did until the age of 26. But it seems that he, like Steve Kerr, has started to get something of an understanding of the benefits of rest. The “old days” argument, it appears, finally has a shelf life for Stotts, too.

It was almost as if Aldridge couldn’t endorse the idea of resting enough.

“I felt great,” Aldridge said. “It was a great decision by the coaches and medical staff. It’s about going into the playoffs feeling great. And healthy but I feel good.”

Aldridge later said that it was a joint decision by he and the coaches to not go to Brooklyn.

Batum, who has dealt with wrist issues and even had a platelet-rich plasma injection in his knee earlier in the season, looked fantastic. Even though Andrew Wiggins tuned him up for 29 points. Wiggins has played well against Batum and the Blazers all season long, and tonight was no different. He’s special and I can’t wait to see him with a real team.

Of course, the question of who the Blazers will play is the one that is most on the minds of Blazers fans.

But Terry Stotts is taking a Doris Day approach to the subject of who they will play.

Even Robin Lopez, someone who almost always loathes answering questions about other teams and basketball in general, is looking at the standings. But if you ask Lillard or Batum, they aren’t going to worry about it.

“I think very match-up is going to be tough,” Lillard said.

As of most recent, ESPN’s projections had the Grizzlies as Portland’s most likely opponent in the first round. The Spurs, who are coming like the winter, have the second-highest odds of facing the Blazers.

But, we only have so much brain power for such computations.