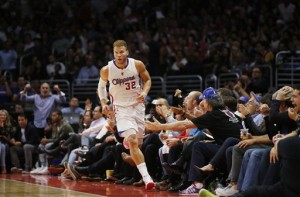 Los Angeles Clippers Blake Griffin runs past fans holding out their hands for high fives after scoring against the Golden State Warriors during the second half of an NBA basketball game, Tuesday, March 31, 2015, in Los Angeles. (AP Photo/Danny Moloshok)