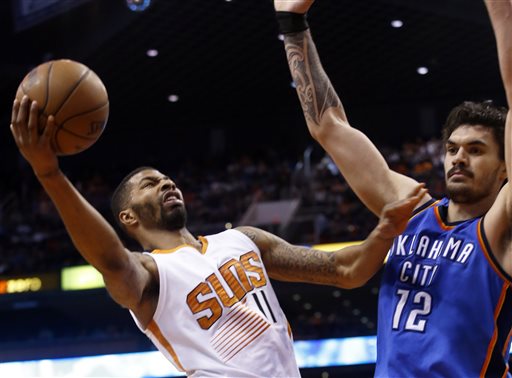 We just saw these guys two games ago but just to recap, they are on the outside looking in on the West playoffs but carry a dangerous streak that can beat even the best teams in the league. They lost to the Thunder last night and are standing on their last legs as far as trying to get into the playoffs.

It took LaMarcus Aldridge going supernova in the fourth quarter for Portland to escape Phoenix with a win on Friday night. Aldridge scored 27 points but it may has well have been 40 in a low scoring game where Portland was able to boost their slipping post-All Star defensive metrics.

Another reason why the game was very low scoring was the play of the point guards who couldn’t find the ocean from a battleship.

Lillard got in early foul trouble which may have had an effect on his game. But luckily for the Blazers his counterpart Eric Bledsoe had equally terrible shooting night. Lillard was 4-of-15 and Bledsoe was 5-of-20 from the field.

After a Dorell Wright 3-pointer with about eight minutes left in the 2nd quarter, the Suns outscored the Blazers 36-21 from then until the end of the third quarter. The Blazers put themselves behind the eight ball and while a lot of it was on them, they also couldn’t get a host of high quality looks to go.

During one stretch in the third, Aldridge missed four consecutive lay-ups around the basket. But the Blazers did themselves no favors with their terrible free-throws. They were 4-of-11 in the first three quarters and were still disappointing at the line overall, going 8-for-18. It seems that they were caught up in March Madness like the rest of us.

And yes, the Blazers oddly had trouble at the free-throw line, including Aldridge who has been the team’s best free-throw shooter for much of the year. CJ McCollum has also been off at the line despite shooting well from the perimeter since getting consistent playing time.

The biggest difference will be that the Suns will have a little bit more punch off their bench as Brandon Knight played some minutes on Sunday after missing eight games in a row. Knight is a nice player, good scorer and has good size to defend 2’s and 3’s. Portland’s bench outplayed Phoenix’s in the last meeting but now that they have Knight, expect a much more even match-up. If Knight is like himself, Phoenix should have a small advantage here.

Portland’s bench has been playing better. The starters got outplayed after a good first quarter and Stotts had to go small down the stretch to get the win with Aldridge as the lone big man.

I’m sure we will see more of that but Portland’s starters haven’t been playing great. As we approach the playoffs, they only have 10 games left to work out the kinks before things really start to turn up.

The Suns will be eliminated from the playoffs with a loss and Portland will clinch a playoff spot with a victory. Portland’s magic number for clinching the Northwest Division is currently three games and could go down to two with a victory.