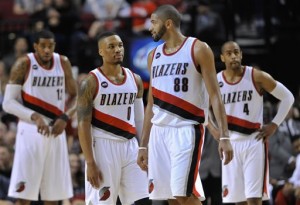 Portland Trail Blazers’ Damian Lillard (0) talks with Nicolas datum (88) as they return to the court during the second half of an NBA basketball game against the Denver Nuggets in Portland, Ore., Saturday, March 28, 2015. The Trail Blazers won 120-114. (AP Photo/Greg Wahl-Stephens)