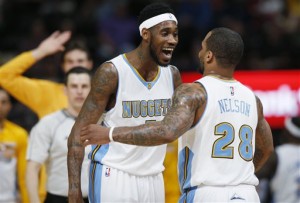 Denver Nuggets forward Will Barton, left, celebrates with guard Jameer Nelson after the teammates hit back-to-back baskets that prompted the Utah Jazz to call a time out in the fourth quarter of an NBA basketball game Friday, March 27, 2015, in Denver. The Nuggets won 107-91. (AP Photo/David Zalubowski)