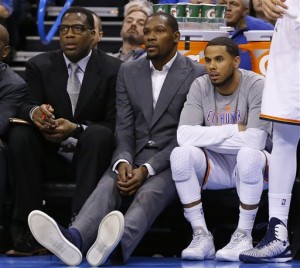 FILE – In this March 4, 2015, file photo, injured Oklahoma City Thunder forward Kevin Durant, center, watches from the bench with guard D.J. Augustin, right, and assistant coach Mark Bryant, left, during the first quarter of an NBA basketball game against the Philadelphia 76ers in Oklahoma City. Durant will have bone graft surgery next week to deal with a fractured bone in his right foot, and he will miss the rest of the season, the Oklahoma City Thunder announced Friday, March 27, 2015. (AP Photo/Sue Ogrocki, File)