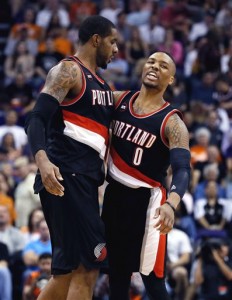 Portland Trail Blazers’ LaMarcus Aldridge celebrates with Damian Lillard (0) after Aldridge scored against the Phoenix Suns during the second half of an NBA basketball game, Friday, March 27, 2015, in Phoenix. The Trail Blazers won 87-81.(AP Photo/Matt York)