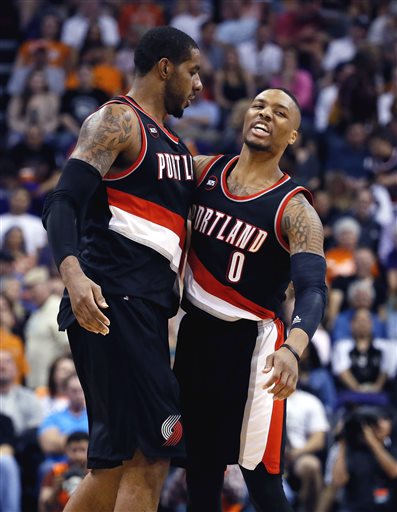 The Portland Trail Blazers got off to an excellent beginning, had a forgettable middle but a thrilling end courtesy of LaMarcus Aldridge to defeat the Phoenix Suns 87-81 to move one step closer to clinching the Northwest division.

As CBSSports.com’s Zach Harper wrote the other day, Aldridge is one of the best clutch shooters in the league this season. Tonight he only added to that resume of shooting well late in the game.

Their starters played solid defense and their offense was able to find quality looks. LaMarcus Aldridge was the catalyst, finding ways to get open looks against the young Suns’ defense. He had 12 first quarter points and was the main reason why the Blazers had so much success.

The Suns are young and they go after teams. They don’t play the most conventional style and that often suits them against a more conventional team like the Blazers. The Blazers bench actually helped the Blazers extend their first quarter lead. But then when the starters came back in, everything went downhill.

The movement on offense of both players and the ball wasn’t the same. And the Suns started to get into a rhythm, playing with confidence and hitting tough shots and getting easy ones. Those are the type of shots that the Suns make when they get it going and it shouldn’t have been a surprise that they made them.

Lillard got in early foul trouble which may have had an effect on his game. But luckily for the Blazers his counterpart Eric Bledsoe had equally terrible shooting night. Lillard was 4-of-15 and Bledsoe was 5-of-20 from the field.

After a Dorell Wright 3-pointer with about eight minutes left in the 2nd quarter, the Suns outscored the Blazers 36-21 from then until the end of the third quarter. The Blazers put themselves behind the eight ball and while a lot of it was on them, they also couldn’t get a host of high quality looks to go.

During one stretch in the third, Aldridge missed four consecutive lay-ups around the basket. But the Blazers did themselves no favors with their terrible free-throws. They were 4-of-11 in the first three quarters and were still disappointing at the line overall, going 8-for-18. It seems that they were caught up in March Madness like the rest of us.

Dorell Wright also continues to be a bastion of stability. Late in games, early in games, it doesn’t really matter. Wright is doing his job that the Blazers need of him, bringing good two-way play whenever he is in the game.

The Blazers have one more game in this four game in five night stretch Saturday night against the Denver Nuggets where Will Barton will be making his first appearance in Portland since being traded at the deadline.