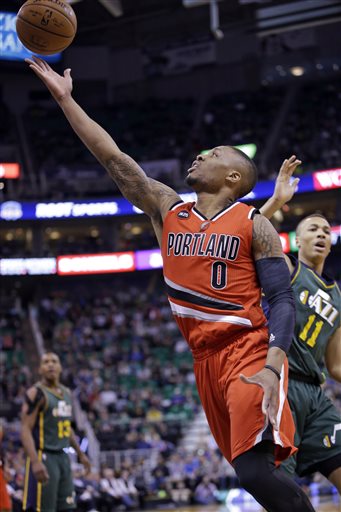 It wasn’t pretty, but the Portland Trail Blazers got a crucial victory 92-89 over the Utah Jazz Wednesday night to stop a five-game losing streak.

The first half of Wednesday’s game in Utah had to be the weirdest half of ball the Blazers played all season. Nicolas Batum was activated and was dressed but Allen Crabbe was inserted into the starting line-up. LaMarcus Aldridge came back after missing Tuesday’s game against Golden State but he didn’t exactly lift the Blazers up with his performance in the first half.

The Jazz were also without their best player in Gordon Hayward. But the Blazers have been one of the most fragile teams in the league as of late and they needed every break they could get.

It’s not exactly a secret that Rudy Gobert covers Aldridge, and basically any post scorer, better than anybody in the NBA. Aldridge struggled to get going. The Blazers couldn’t really get into the paint in the first half. They didn’t attempt a free throw until there were was under 1:30 left in the first half.

It wasn’t a pretty game and Portland’s offensive output was a far cry from what we saw in the first half against the Warriors.

In the second half it looked as though the Blazers had something going. They even took a brief lead in the middle of the quarter. However, the Jazz went on a monster run and ended up leading by 10 points after the third quarter. The Blazers offense devolved into a turnover machine late in the third quarter, allowing the Jazz to open up the game for a moment.

In the second half, Lillard and Aldridge ran the show. Lillard scored 23 points while tying a career-high with 12 assists. He was aggressive attacking the basket in the fourth quarter and it helped the Blazers’ offense immensely. Lillard also got to the line which was something Portland desperately lacked. Lillard was as fantastic as a player could be when shooting 6-for-16 from the field.

But the unsung hero of the night was Dorell Wright. Wright has been a calming influence on the Blazers almost every time he takes the court. He led the Blazers in scoring after the first half with seven points but in the fourth quarter he made his imprint once again.

Wright poured in 8 fourth quarter points and one very nice assist. He finished with 15 points, five rebounds and two assists.

Portland used a small line-up with Aldridge at center surrounded by four perimeter players in Lillard, Crabbe, Wright and Arron Afflalo. Stotts stuck with that line-up to the very end, bucking conventional wisdom against a bigger Utah front line. And it worked. The Blazers desperately needed this before heading into a game against the Suns who are still fighting for their playoff lives.

The Blazers outscored the Jazz 37-24 in the final period.

With the Thunder getting walloped by the Spurs, the Blazers will hold a five-game lead in the division with just 12 games to play including the tiebreaker.

It wasn’t a particularly great performance but a slump-busting win doesn’t have to be. Portland is back in the win column and they did it without Batum and Kaman.

Stotts continues to show how well he is able to adapt his gameplan on the fly and the Blazers gave themselves a little bit more security.