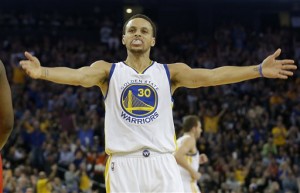 Golden State Warriors guard Stephen Curry (30) celebrates after scoring against the Washington Wizards during the second half of an NBA basketball game in Oakland, Calif., Monday, March 23, 2015. (AP Photo/Jeff Chiu)