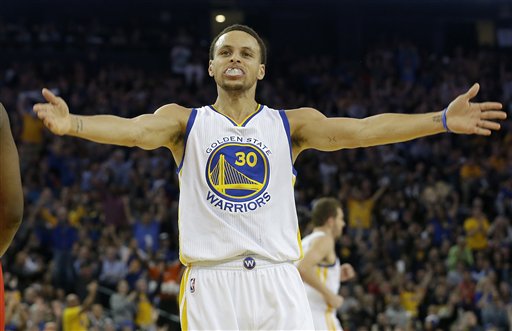 These guys are good. The Warriors have the NBA’s best record and they’ve already clinched a playoff spot in the Western Conference. They have a 7 and a half game lead over the rest of the conference with 12 games left to play.

And from where I’m standing from afar, it looks like the Warriors are going to bust it down this stretch of the season to rack up as many wins as possible before resting all of their key players for the final week or so of the season.

They have 12 games left and they will likely only need to win three more games to clinch the final playoff spot. Memphis trails them by 7.5 games but the Grizzlies only have 11 games left on their schedule and they probably won’t go undefeated. The top seed is a formality but the Warriors appear to want to keep things going.

Head coach Steve Kerr told reporters following their blowout win in Oakland on Monday that he didn’t think he was going to rest his starters against the Blazers, which would get them one win closer to a relaxing end to the regular season.

And if anybody deserves to relax at this point in the season it’s definitely the Warriors. They currently have net rating of +12 overall according to NBA.com, meaning they’ve outscored their opponents by 12 points per 100 possessions.

The only team to come close a a point differential of 12 points per 100 possessions over the last 15 seasons of basketball were the 2007-08 Celtics who won the title and the 2012-13 Thunder whose playoff run was derailed when Russell Westbrook tore his meniscus. So, the Warriors are in pretty good company.

The Blazers have been struggling lately and will likely be without LaMarcus Aldridge (left index finger), Nicolas Batum (back) and Chris Kaman (shoulder) for tonight’s match-up. A full strength Golden State squad might make things ugly against this short-handed Blazers squad. Finding quality shots without Aldridge against the league’s stingiest and most versatile defense is going to be one of, if not the biggest challenge they’ve had in the 2nd half of the season.

Draymond Green will create havoc on the defensive end and Curry and Thompson can always light it up. Golden State’s bench is also full of veterans and players who have started for them before like David Lee and Andre Iguodala.

The Blazers are fighting an uphill battle tonight. Thankfully for them they have a five game lead over Oklahoma City for the division and also hold the season series tie breaker. But with games coming up against teams playing well lately like the Jazz or the Suns who still have playoff hopes will also be hard.

Portland needs to get healthy but they have to figure out a way to tread water and hold on to that division lead with 14 games left to go in the season. They play four games in five nights this week but they get their toughest task out of the way first.