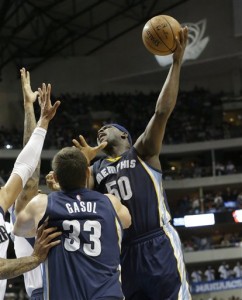 Memphis Grizzlies forward Zach Randolph (50) shoots over inside lane traffic during the first half of an NBA basketball game against the Dallas Mavericks Friday, March 20, 2015, in Dallas. (AP Photo/LM Otero)