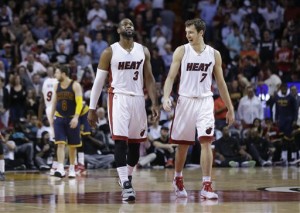 Miami Heat’s Dwyane Wade (3) and Goran Dragic (7) walk on the court during the second half of an NBA basketball game against the Cleveland Cavaliers, Monday, March 16, 2015, in Miami. The Heat defeated the Cavaliers 106-92. (AP Photo/Lynne Sladky)