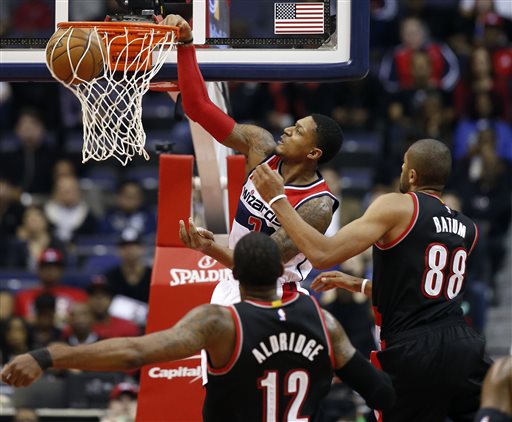 The Washington Wizards held off a late rally by the Portland Trail Blazers Monday night in the Nation’s Capital to win 105-97. The Wizards led by as much as 25 and dominated much of the game as the Blazers looked like a team that had played the night before.

The Blazers are now 9-5 on the second of back-to-backs but tonight it definitely looked like a fresh Wizards team took advantage of a sluggish Blazers team that were making tons of mental mistakes. The Blazers only committed 10 turnovers as a team but it seemed like the Wizards were deflecting a much higher percentage of Blazers’ passes than we’re used to seeing.

Making matters worse for Portland’s offense was that almost everything was coming up short (sound like fatigue, anyone?). Arron Afflalo’s jumpers that had fallen early in the last two games had clanked off the front rim and the Wizards employed the same strategy that the Raptors did Sunday in using multiple looks to try to take LaMarcus Aldridge out of the game.

The Blazers couldn’t make the Wizards pay for their double teams often and had a below-average night shooting the ball from long-range. The Blazers found ways to score in a game where they didn’t shoot well, often attacking the offensive boards. Aldridge had eight of their 14 offensive rebounds and overall the Blazers had 18 second chance points.

But the Blazers lost this game with their transition defense. Even off missed shots, the Blazers needed to be better. John Wall is one of, if not the league’s most dangerous ball-handler in transition, and he used his speed to beat the Blazers down the court more than a few times. Even the likes of Ramon Sessions and Rasual Butler got their licks in on the Blazers, so it was just the starters who played poorly. And bench players don’t have as much as an excuse for fatigue.

Simply put, the Blazers were bad. The Wizards are on a little bit of a roll and got up for a big game against a tough opponent. Portland got some shots to fall after the Wizards pushed the lead up 25 and the Blazers showed fight like they always do. Batum had his second straight double-double and Aldridge played well even though the Wizards worked hard to take him out of the game.

Chris Kaman played well off Portland’s bench but few others of Portland’s reserves could say the same. CJ McCollum did a decent job fitting into the offense and hitting shots during the rally but almost everybody else didn’t have a productive game. Meyers Leonard and Dorell Wright were ice cold from the field.

It’s not a surprise the Blazers lost one of these first two as it is likely their toughest back-to-back games on the trip with two winning teams. They’ll play the Miami Heat Wednesday on the heels of an emotional win against LeBron James and co.