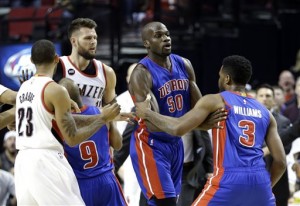 Detroit Pistons forward Shawne Williams, right, is held back by teammate Joel Anthony after an altercation with Portland Trail Blazers forward Joel Freeland, from England, second from left, during the second half of an NBA basketball game in Portland, Ore., Friday, March 13, 2015. Both players were ejected from the game. The Trail Blazers won 118-99. (AP Photo/Don Ryan)