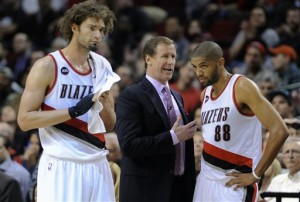 Portland Trail Blazers’ head coach Terry Stotts, center, talks with Nicolas Batum (88) and Robin Lopez, right, during a timeout against the Dallas Mavericks during the second half of an NBA basketball game in Portland, Ore., Thursday, March 5, 2015. The Trail Blazers beat the Mavericks 94-75. (AP Photo/Greg Wahl-Stephens)