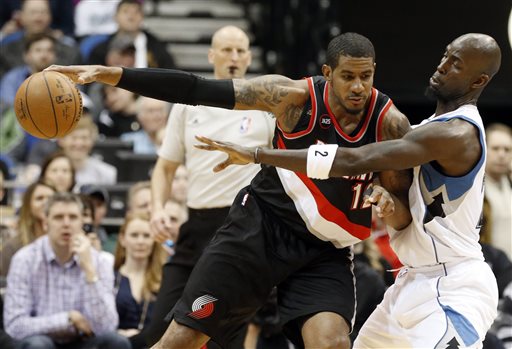 A 70-point second half propelled the Minnesota Timberwolves to a 121-113 win over the Portland Trail Blazers, snapping their five-game win streak. The Blazers had a 55-51 lead at halftime but could not sustain it as the Timberwolves caught fire from the midrange but overall just outplayed the Blazers.

Gary Neal caught fire in the fourth quarter, scoring 17 of his 27 points. The Wolves were 19/40 (47.5 percent) from the midrange and a super-efficient 8-12 in the painted area. And it seemed like different players chose times to catch fire for Minnesota while Ricky Rubio ran the show.

Nicolas Batum looked aggressive and he was efficient to begin the game. He needs to be both for Portland to help make up some of what Wesley Matthews brings and he did that early on. But his big night didn’t continue in the second half, especially when Andrew Wiggins got going in the third quarter.

Damian Lillard finished with a game-high 32 points but a lot of those points came at the very end of the game when the Blazers were in desperation time. While they were getting buckets, they could not get a single stop down the stretch. The Blazers weren’t flawless but Rubio also drained a 3-pointer in Aldridge’s face with the shot clock running down. Bottom line: the Blazers defense was not where it needed to be, especially late, to give themselves a chance.

Is some of that missing their best perimeter defender in Matthews? Absolutely. How could it not be? But some nights Gary Neal gets hot in the fourth quarter and you can’t do anything about it. But they Blazers could have been better on the defensive end.

Rubio flourished on the offensive end, getting a near triple-double with 10 points, 15 assists and eight rebounds. The Wolves offense is allergic to 3-pointers, and they got the shots that they work to get. But when they did take a 3, they likely hit it, going 4-of-7 from long range.

The Wolves are the worst team in the West and this is the second time the Blazers have lost to them in Minnesota. With Garnett playing down the stretch and the intensity they played with, they were eager to end their losing streak with a win against a playoff team.