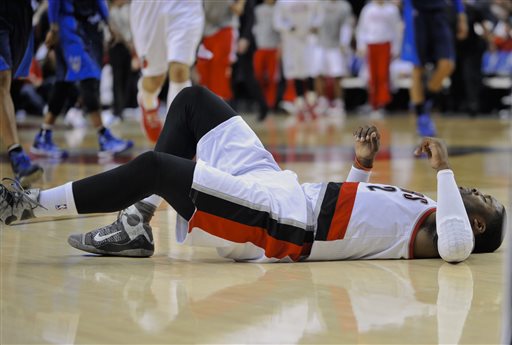 Thursday was a cruel reminder that, in the NBA, luck may be the biggest variable in who wins and who doesn’t.

The Portland Trail Blazers defeated the Dallas Mavericks by 19 points, 94-75. Any other night the arena would have been rocking and the locker room wouldn’t have been so somber. But tonight the Moda Center knew deep down what they’d seen. It was one of those nights in the NBA where you know that everything changed. They’ve seen enough moments like that around these parts, which they had mostly started to forget.

The Blazers are just the latest to be bit by the injury bug this season, but this is the first injury that has an impact on who will make it out of octagon that is the Western Conference playoffs. The timing of the Matthews injury, after the loss of franchise legend Jerome Kersey, then a thrilling win in Los Angeles, just as they seemed to get things going with the addition of Afflalo, seemed cruel.

“I’m frustrated,” Matthews said. “You say everything happens for a reason, I was just in the tube, thinking what was this reason? I can’t find it right now. It’s bigger than me. And this team has got something special still. I believe in that. I feel that they do too. And we’ll all weather this. I’ll do what I need to do. This team will do what it needs to do.

Wesley Matthews knew what happened. Mostly everybody did. But the Blazers did not confirm until after the game when Matthews had been through an MRI. Matthews, ever the professional with the media, still came out to do his postgame availability.

He admitted that he knew. When I thought that he had rolled his ankle after the play, in no sooner than a minute did I get multiple replies saying they saw it was an achilles.  And then the replays came. Referee Ron Garrettson knew when he saw Matthews go down. I could see that Nicolas Batum knew when I saw him explaining what he had just seen to assistant coach David Vanterpool.

The Blazers were obviously and understandably shook after the game.

Nicolas Batum was distraught. Damian Lillard, though, probably had the best quote when trying to sum up Matthews.

“Wes works hard,” Lillard said. “You know, plays harder than anyone on our team. plays with a lot of passion. A lot goes into being Wes Matthews.”

A lot goes into being Wes Matthews indeed. And all of those things that make him also make the Blazers.

Robin Lopez said it’s the intangibles that the Blazers are going to miss the most.

“I love playing with Wes, I always have,” Lopez said. “He brings a lot of tangible things and a lot of intangibles on the floor. You got to hope for the best.”

Lopez continued: “Obviously he’s a huge defensive presence for us as well. A big 3-point shooter. But the intangibles are what we are going to miss most. Fortunately we are going have him on the bench.”

As our sports editor Micah Rice wrote earlier this season, Matthews was more than just the fiery competitor on the court. He was the team’s big brother. The heart of the team. The  chest bump that knocked Robin Lopez almost to the ground at the end of the line when the starting line-up is announced.

It was one of those nights that everything changed and even with the Afflalo trade, the Blazers can’t replace Matthews. It happened with the Nuggets in 2013. It happens every season when a team loses loses their contention hopes close to the playoffs.

The Afflalo trade is key now and we will all get to see a lot more Alonzo Gee than we anticipated. And the Blazers will need everybody to step up their play. Nicolas Batum in particular has to pick up the scoring load since Matthews is the team’s third-leading scorer. CJ McCollum played well before the Afflalo trade, but he’s going to have to bring consistency. And even then, there is no replacement for the heart, ability, guile and leadership that Matthews brings.

As Matthews heads into free agency, it couldn’t come at a worse time for him. For the Blazers, they lost their heart and soul.