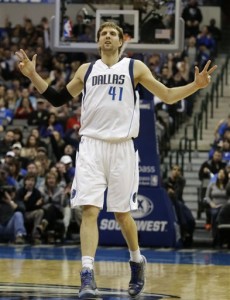 Dallas Mavericks forward Dirk Nowitzki reacts after hitting a three pointer during the second half of an NBA basketball game against the Brooklyn Nets Saturday, Feb. 28, 2015, in Dallas. (AP Photo/LM Otero)