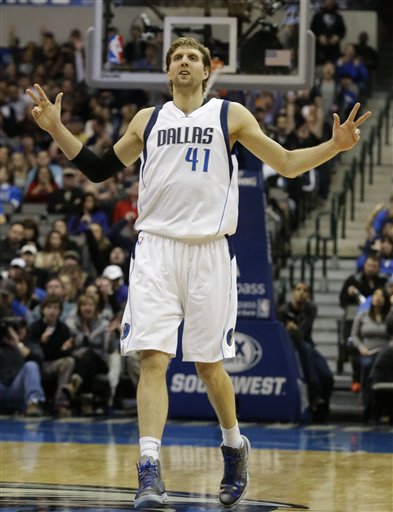 Injuries: Chandler Parsons (ankle) is out

The Dallas Mavericks already have 40 wins and sit in sixth place in the Western Conference. But they are just a game and a half behind the Blazers in the loss column.

Remember, as something to watch down the stretch, should the Blazers stay in a holding pattern and are destined for the fourth seed, they still could start the first series on the road. It doesn’t seem very likely but every time the Blazers to lose to one of the teams near them in the standings, the more likely that scenario becomes.

Not only that, the Blazers also will be eager to win and take a 2-1 lead in the season series with one game left, the last game of the regular season down in Dallas in April.

The Blazers were less than three minutes away from being up 2-0 in the season series but we all know what happened. The Mavericks came back from 11 points down to force overtime and eventually win the game by 10 points.

Once again, the Blazers’ new acquisition of Arron Afflalo will likely show its importance once again. Especially with Parsons slated to miss the game, the Blazers will have a clear advantage on the wing. But it wasn’t just Parsons. Al-Farouq Aminu caused problems for the Blazers with his defense and rebounding.

The Mavs also played a very tight rotation against the Blazers last time so I would expect the same thing even though they will be without their leading 3-point shooter. Devin Harris also had a very good outing in the last meeting and he outplayed Steve Blake by a wide margin, especially down the stretch when the Blazers started to lose their lead that was as high as 16.

Batum was also 0-for-8 in the last meeting and without having to expend as much energy against Parsons and looking a little bit better after the break, perhaps he will have a better game.

But with Portland coming back home for just a night before heading back out on the road the next day, the Blazers will definitely be tired. And the Mavericks haven’t played since Monday.

The Blazers are 8-4 so far this season in the second night of back-to-backs.

After a thrilling win on Wednesday night, they will likely be tired both mentally and physically. But the Blazers are finding ways to win right now. Should be a good game and it’s another crucial one that could have implications in April.