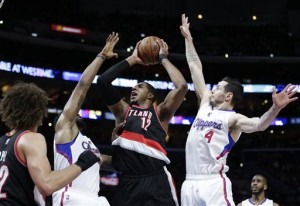 Portland Trail Blazers’ LaMarcus Aldridge, center, goes up for a basket as he is defended by Los Angeles Clippers’ DeAndre Jordan, left, and J.J. Redick during the second half of an NBA basketball game, Wednesday, March 4, 2015, in Los Angeles. The Trail Blazers won 98-93 in overtime. (AP Photo/Jae C. Hong)