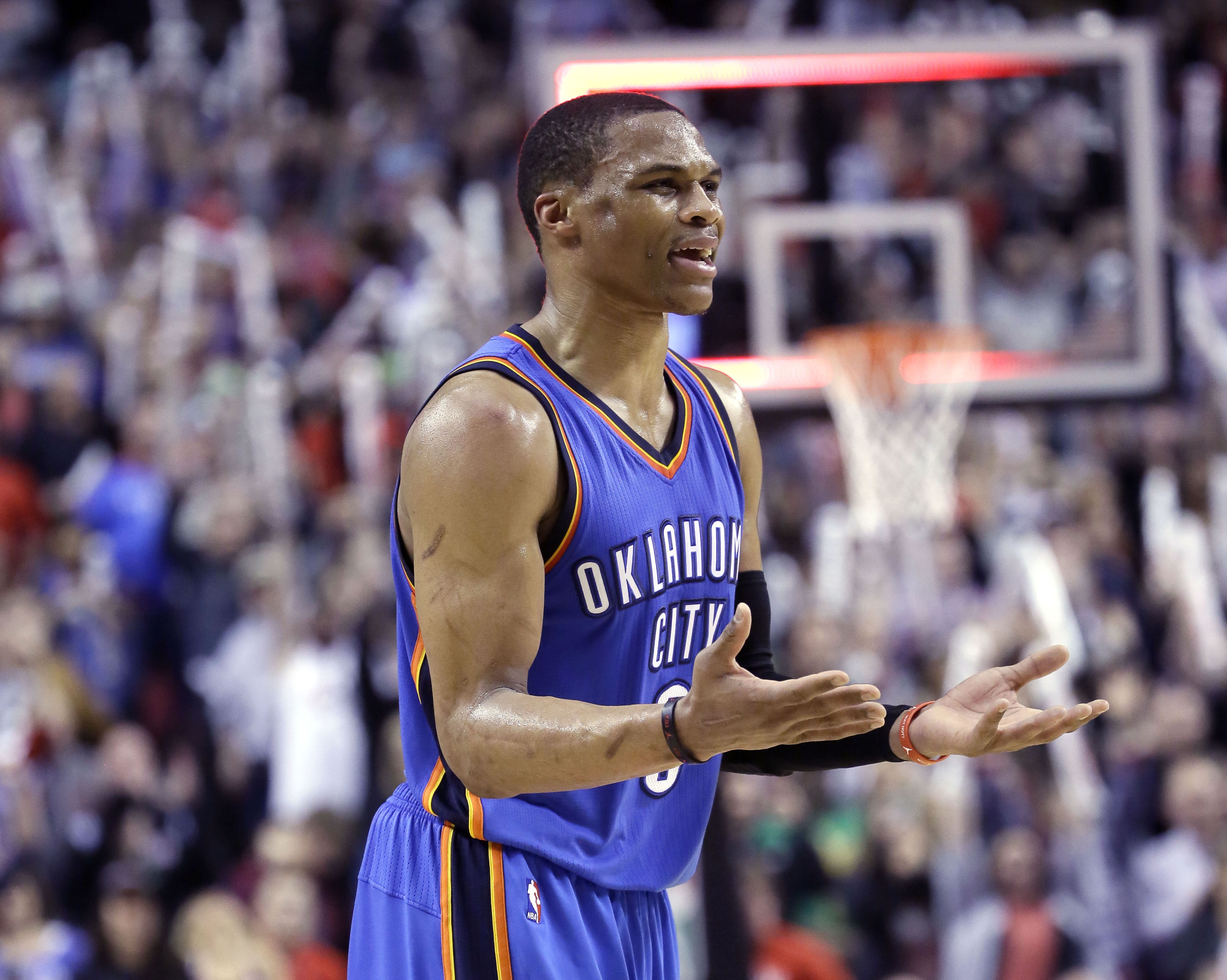 But Westbrook’s heroics fell short in the loss and the Thunder got another dose of terrible injury luck as their hero left the game with a dent in his face captured by the AP’s Don Ryan.

The dent has become the dominant story as Oklahoma City’s season of injury luck but the Blazers once again have found that feeling.

Damian Lillard described feeling  “it” in the last game. And, with some reading between the lines, Lillard was talking about that je ne se quois of basketball. Grantland editor Bill Simmons calls it “The Secret.” But as of Wednesday the Blazers were back to playing 100 percent selfless basketball, trusting in the offense, their spacing and their passing to put on a clinic against the defending champs.

And the Blazers had it tonight, even when Mitch McGary made their defense look like it was ranked 23rd instead of third. Their fourth quarter was an inspired effort with Aldridge closing as their lone big man.

When Aldridge was closed out on hard in the third quarter and the Blazers trailed by 8, he still passed it to an open Nic Batum, who had struggled with his shot all night but cashed that attempt to cut the Thunder lead to five with 6:13 left to go in the third quarter.

The Thunder pushed the lead up to 13 again but the Blazers exhibited the same kind of trust they showed Wednesday against San Antonio.

Arron Afflalo played every minute of the fourth quarter but the Blazers closing line-up made a huge difference down the stretch. With Afflalo, the Blazers have a threat of five players who can truly create a shot for themselves and for others.

The Thunder, especially Westbrook, are aggressive in their help defense. Every time Aldridge caught the ball, especially late, Westbrook or another Thunder player would force the ball from his hands. And Aldridge masterfully played their rotations against them.

Augustin overruns it and Aldridge goes to Matthews in his sweet spot, where he shoots 47%.

Then a few possessions later, the Thunder blitz Aldridge again and Afflalo makes them pay. This is why they brought him in and Aldridge’s trust was rewarded. Once Aldridge collects himself…

The pass to Matthews was especially good but Aldridge showed very good decision making and execution when the Thunder forced the ball from his hands.

The Blazers needed to make plays late and Aldridge’s post-ups and second chances were big factors. But when Aldridge was the only big man on the floor, he dominated. Ibaka played admirably but could do nothing to stop Aldridge in the fourth quarter as he went 4-of-6 from the field.

Lillard had his best game in six weeks and Aldridge proved once again just how good he can be, the Blazers played with that same feeling again. They just had a little bit more doubt and needed more belief to pull out the win against a clearly improved Thunder team armed with the guy whose playing better than anybody on the planet right now.

Is Westbrook as tough to cover as anyone in the league right now?

Now that Portland has a seven-game lead over the division and have clinched the season series, they are well aware of what was accomplished with the win. But as Stotts said before the game, the Blazers can’t be too concerned with the implications of Friday’s exciting win.

“When the playoff race is kind of getting tight in the Western Conference and we get a huge win over them, a division team, 2 games in a row now that we’ve played good basketball. I think it’s more about the way that we are playing the last few games more than tonight being a big game. Or the biggest game or the best game of the season or whatever.”

Still, the excitement for some of the Blazers was too much not too liken it to something bigger than just a win in February.