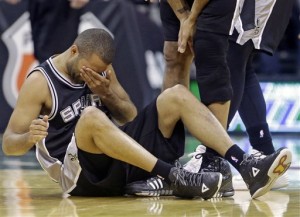 San Antonio Spurs guard Tony Parker holds his face after a collision in the second half of an NBA basketball game against the Utah Jazz, Monday, Feb. 23, 2015, in Salt Lake City. The Jazz won 90-81. (AP Photo/Rick Bowmer)