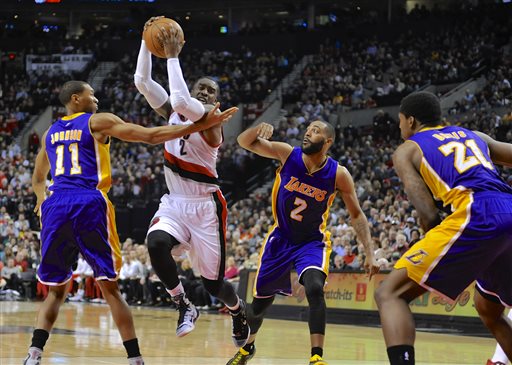 The Portland Trail Blazers cruised into the All-Star break after Wednesday’s emphatic 102-86 win against the Los Angeles Lakers. The loss was the Lakers’ 11th straight and towards the end of the game, you could hear the fans in the 300 level try to start a “BEAT LA” chant.

But with Kobe Bryant out for the season as well as rookie Julius Randle and Nick Young leaving the game after the third quarter, the chant quickly faded as the Lakers did in the third quarter.

The game was somewhat close at halftime even though the Lakers didn’t look they wanted to be there after losing by double-digits to the Nuggets on Tuesday who are far from a pillar of continuity and stability.

The result on Wednesday was expected. And now the Blazers stand at 36-17 going into the All-Star break. The Blazers talked about what that means after the game.

Having missed 35 games from their starters due to injury, the fact they have the same record speaks for itself after having a clean bill of health up to this point last season.

As of recent, it has been the play of CJ McCollum and Meyers Leonard off Portland’s bench that has impressed. Leonard has played in 19 games in a row going into the break. McCollum has scored in double-figures in three of the last four games.

“CJ has had 3 or 4 good games and for him, I think you can see his confidence growing, coming into the game looking for his shots, not hesitating and being ready to make plays,” head coach Terry Stotts said. “He’s at his best when he does that. Meyers has had a body of work. He’s had a good, six, eight weeks or whatever it is and I think he’s growing more confident and consequently, the players on the court are trusting him as a player.”

Now they look to the weekend with most players not involved in the All-Star festivities going to some place warm. Others are going to see family.

Of course, LaMarcus Aldridge and Damian Lillard will be front and center this weekend. And Wesley Matthews will be manning the 3-point racks.

Aldridge, now going for the fourth time, says it gets more special every time.

“It’ll be fun. As you do more I think it becomes even more special, rubbing elbows with those guys. It’s just a big time weekend for you,” he said.

And with New Orleans’ Anthony Davis bowing out of the game due to a shoulder injury, there is a spot in the frontcourt open alongside Marc Gasol. With three perimeter players slated to start in Stephen Curry and James Harden and Klay Thompson in place of Kobe Bryant and Blake Griffin.

“I mean I would like to start,” he said. “I’m not going to sit here and say that I wouldn’t. I think I’d be lying if I did. Luck hasn’t always went our way up here in the Northwest so we’ll see what happens.”

Aldridge has always felt like a bit of an underdog and I guess in his eight years here he’s also picked up a little bit of Northwest gloom. Western Conference head coach Steve Kerr has a lot of options and it’s not exactly a secret that this could be Tim Duncan’s final season. And considering the way the Spurs were revered after their last two Finals appearances, nobody would cry foul if Duncan got the nod.

But if all else fails, Aldridge can point out to Kerr that if he starts the starting frontcourt would be “LaMarc Gasoldridge,” which if Kerr enjoys a good pun, should sway him.