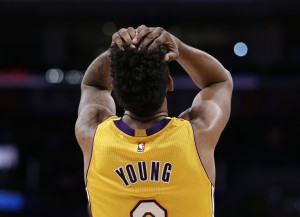 Los Angeles Lakers’ Nick Young reacts to a foul call on teammate Carlos Boozer during the second half of an NBA basketball game against the Denver Nuggets on Tuesday, Feb. 10, 2015, in Los Angeles. The Nuggets won 106-96.