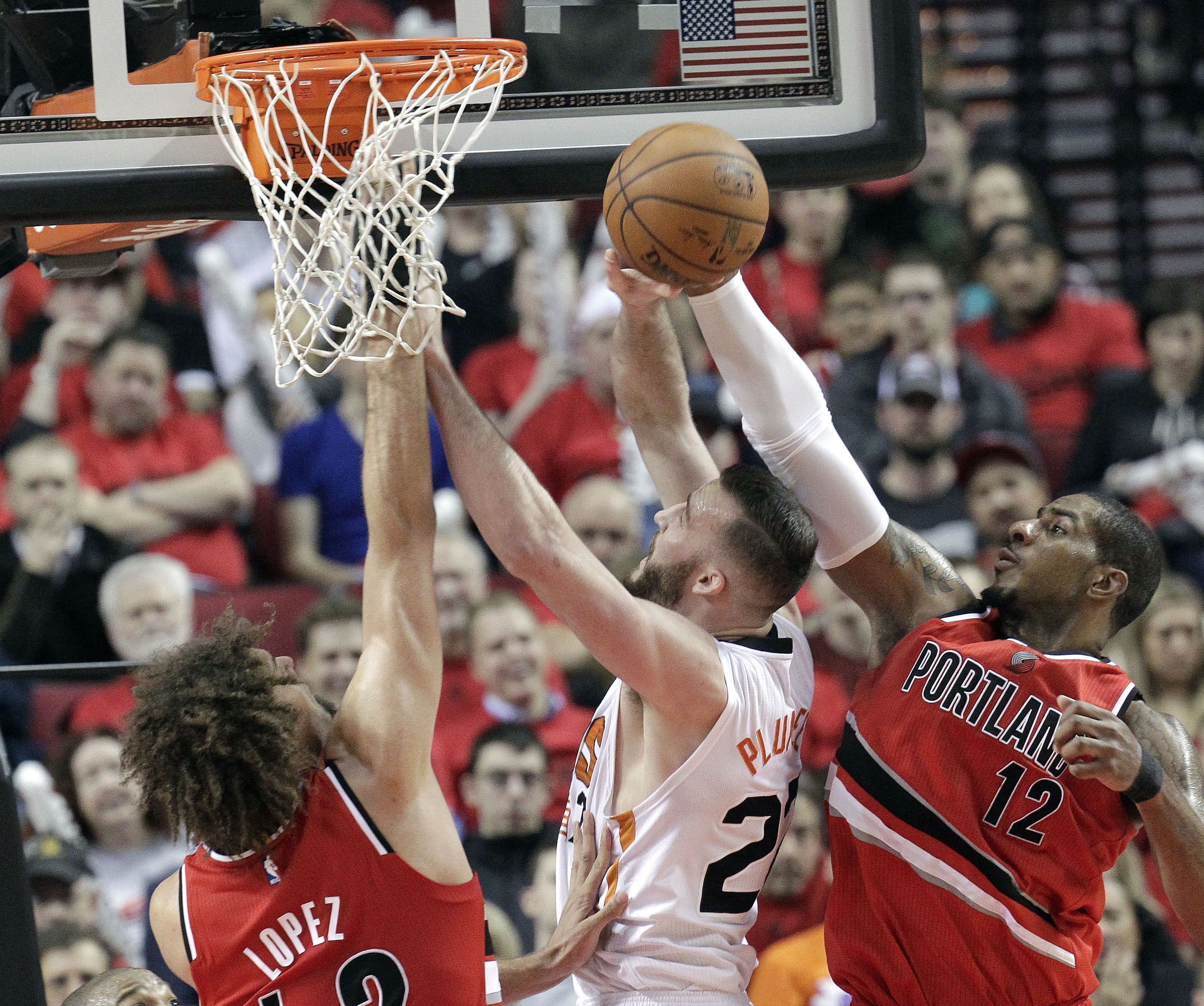 The Portland Trail Blazers defeated the Phoenix Suns in surprising blowout fashion 108-87, giving them their first win over a team in the Western Conference playoff picture since Dec. 19.

Nicolas Batum had a game-high 20 points to go with four rebounds and seven assists.

But did you see how the Blazers bench played in this game? If you’d brought a being from another planet along to the game they would have thought the Blazers, not the Suns, had one of the league’s most potent benches and that a large man wearing a beanie with a scraggily beard was a kind of hero to these people (SHEEEEEEEEED).

The Blazers  demolished the competition with a bench heavy unity in the fourth quarter that allowed the starters to build their lead into double-digits and hold it there. And it was the bench heavy unit of Steve Blake, Wesley Matthews, CJ McCollum, Meyers Leonard and Robin Lopez that did the damage.

The Blazers led by as much as 19 in the first half, mostly because the Suns struggled to make shots and get out of their own way. Eric Bledsoe, who scored 33 in the last meeting, had just 17 and six turnovers.

But by the start of the fourth quarter, Suns only trailed by a point and had even taken the lead for a time in the third quarter.

A Blake 3-pointer kickstarted the Blazers on their run and the unit played well together and well off each other. Leonard consistently ran the floor hunting for easy buckets and even the safety Orange on the Suns jerseys couldn’t save them. Robin Lopez ate up Suns drives and got offensive rebounds. McCollum worked well as a safety valve and in the pick and roll and Matthews was Matthews.

“I didn’t think we’d see a game where both teams struggled offensively,” head coach Terry Stotts said. “I thought both teams played pretty good defense. For the most part we were able to pull away in the fourth quarter. I thought the group that was int he game at the beginning of the fourth gave us a nice jump. Got the lead up and we were kind of able to expand on it.”

“It was a good win against a Western Conference team that we will play a couple of more times.”

The Blazers have been known for their fourth quarter heroics but this was heroism of a different kind against an opponent that thrives during this time of the game. Leonard and McCollum both had wonderful games off the bench.

McCollum got his floaters and drives to the rim to fall. With Chris Kaman out due to back pain, Leonard played both the back-up center spot and power forward. He played with Aldridge and Lopez and basically any line-up that had Leonard in it was a positive Thursday. He grabbed eight rebounds and had eight points with no 3-pointers, something almost everyone has come to expect from him.

“You know I was glad CJ had a nice little run in the first half,” Stotts said. “He made some shots, he was confident. That’s what we need him to do. He’s a terrific scorer, we need him to come in and do what he does well. I thought Meyers played a great game at both ends of the court. He runs the court consistently. He’s locked in on the defensive schemes that were in. For the most part he’s been rebounding the ball well at the defensive end and that was important for us.”

If Leonard continues to play like this it’s going to get harder for Terry Stotts to justify not playing him more even when everybody is healthy. And yes, Leonard is having a 40-50-90 season in terms of 3-point percentage, field goal percentage and free-throw percentage. However, it looks as though Leonard will not be able to qualify for it this season barring an explosion in his usage rate.

McCollum looked to be in a nice rhythm before breaking his hand in November and it looked like he hadn’t really gotten it back, at least in a game where the Blazers won. And he appeared to be more comfortable tonight. Portland’s bench needs scoring and if McCollum can provide consistent, efficient offense along with solid defense he should earn minutes.

The third wing spot has been an issue for the Blazers all year long as everybody whose played it hasn’t earned consistent minutes. McCollum’s scoring, as Stotts’ comments indicate, is a way he can do that.

But the Blazers legitimately outplayed one of the league’s best benches tonight, no gimmicks. And as the starters continue to regain their rhythm, the bench providing positive play when they aren’t at their best like tonight, will be huge as Portland navigates the minefield of the Western Conference.