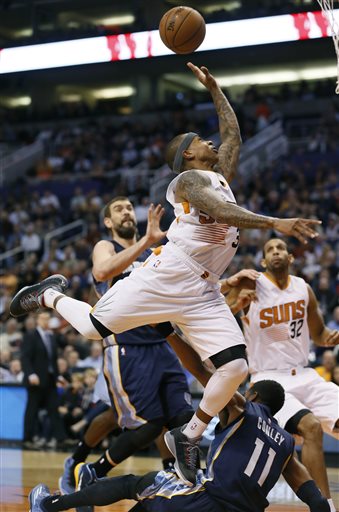 The Phoenix Suns are the only team in the league known to have a rule that suspends its own players for the rest of the game getting technical fouls. But the fact they have a rule reminiscent of a JV team hasn’t kept them to hold on to a spot in the Western Conference playoff picture.

They were whooping the Blazers by as much as 25 points in the last meeting before Nicolas Batum caught fire to help bring the Blazers back on Jan. 21. The Blazers even came back to lead by three points but the Suns quickly regained control.

Batum had a chance to tie the game with 12 seconds left and missed a free-throw that likely would have sent the game into overtime. Instead the Blazers, forced to look for a 3-pointer on the ensuing possession, turned the ball over on the inbounds pass.

But let’s look at how they torched the Blazers.

Goran Dragic and Eric Bledsoe are dynamic backcourt but off the bench the Suns Thomas gives Phoenix another dimension. There is almost no drop off in terms of production at the point guard spot when Thomas comes on to the court.

Bledsoe had 33 points and killed the Blazers by getting to the foul line 15 times, something the Blazers must be better with and should be with Lopez in the line-up, but Thomas had 27 points in just over 28 minutes.

He was too fast for Steve Blake or any of Portland’s defenders who had a chance at him in the last meeting. Bledsoe also torched the Blazers off the dribble. The Suns are not afraid to clear a side of the floor and let guys go isolation.

The Blazers integrity in individual defensive situations must be strong or Phoenix will fill it up as they did in the last meeting.

Defensively, the Blazers will be able to find ways to score on them. Bledsoe is a menace at the point of attack and had three steals on a night when Portland had 15 turnovers as a team. They need to take care of the ball better. And there’ve been too many times over the last stretch the Blazers have been in the mid-to-high teens. They had 14 against Utah but still managed to win and play well.

Bledsoe and the active Suns defense who have a top-7 turnover rate will no doubt have forcing turnovers in mind against a Blazers team that’s had trouble holding on to the rock lately.

It wouldn’t be a surprise to see some Thomas Robinson tonight after he logged a DNP against Utah. He typically plays well defensively against the Morris twins, whom he has a long history with dating back to college and he matches up with them size wise. The Suns also don’t have the type of length that usually causes problems for Robinson.

It will be interesting to see how the Blazers play with Lopez and Aldridge. They found success only once last season against the Suns and Robinson basically finished that game.

But Portland nearly stole a win in Phoenix without either player but even at nearly full strength, Phoenix’s athleticism and unorthodox style has proven troublesome for Portland. Portland’s transition defense has been shaky at times and they cannot afford that against the Suns who play at the league’s second-fastest pace.