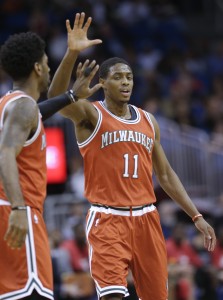 Milwaukee Bucks’ Brandon Knight (11) gets high fives from O.J. Mayo, left, after making a shot against the Orlando Magic during the second half of an NBA basketball game, Thursday, Jan. 29, 2015, in Orlando, Fla. Milwaukee won 115-100. (AP Photo/John Raoux)