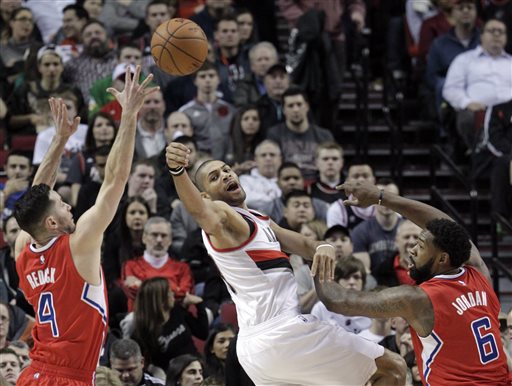 The situations for both of these teams coming in were very different.

The Blazers have been hit by injury after injury, Damian Lillard made the NBA world burn and they were the first team in the league to 30 wins. The Clippers had just finished a weekend that epitomized their season by blowing out a good Dallas Mavericks team Saturday and losing to a not-so good Miami Heat team by double-digits Sunday.

One team was clearly exceeding expectations while another’s roster has been the constant source of trade speculation.

After the game, one team was throwing around comparisons to playoff games and throwing out statements like Wednesday was a “mental toughness” win and blaring G-funk from DJ Quik* from a portable Beats by Dre speaker.

*(thanks to OregonLive.com’s Sean Meagher for confirming the music and capturing this wonderful moment in the Clippers locker room)

The other one was desolate and Terry Stotts down-played the comparisons to a playoff game with both teams playing 8-man rotations. Chris Kaman sat in the corner. Damian Lillard and Steve Blake where speaking quietly to each other. There was no music Wednesday for the Blazers with Nicolas Batum’s season-long funk reaching a grimacing low.

The Blazers didn’t necessarily need this one if you look at the records but this might be the game that hurts most to lose when looking ahead at the schedule for the rest of the week.

After losing on Wednesday the Blazers, the Blazers have a back-to-back against the San Antonio Spurs and Memphis Grizzlies on Friday and Saturday.

“You got to give them credit,” said Blazers center Chris Kaman about the Clippers. “They came in here and beat us. It doesn’t help that we have to go to San Antonio and Memphis on the road. It doesn’t get any easier.”

Such is life in the Western Conference.