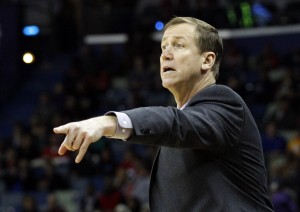 Portland Trail Blazers coach Terry Stotts reacts to a call in the first half of the Trail Blazers’ NBA basketball game against the New Orleans Pelicans on Saturday, Dec. 20, 2014, in New Orleans, La. (AP Photo/Butch Dill)