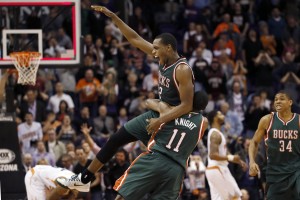 Milwaukee Bucks’ Khris Middleton, is picked up by teammate Brandon Knight (11) after scoring the game-winning basket against the Phoenix Suns after an NBA basketball game Monday, Dec. 15, 2014, in Phoenix. The Bucks won 96-94. (AP Photo/Matt York)