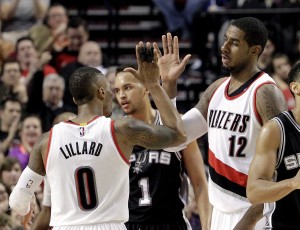 Portland Trail Blazers forward LaMarcus Aldridge, right, high fives teammate Damian Lillard during the second half of an NBA basketball game against the San Antonio Spurs in Portland, Ore., Monday, Dec. 15, 2014. Aldridge garnered 23 points and 14 rebounds while Lillard scored 23 and had 10 rebounds as they beat the Spurs 108-95.(AP Photo/Don Ryan)