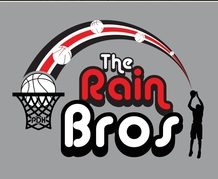 The Dan Patrick show has made a shirt celebrating the Portland Trail Blazers backcourt.

During LaMarcus Aldridge’s interview on The Dan Patrick Show last week, he pitched a nickname idea for Portland’s backcourt combo of Damian Lillard and Wesley Matthews.

LA: You’re making more though. When you’re making it rain you’re really making the 3. So just think about it. Rain brothers.

DP: How about the Rain Bros?

DP: Why don’t you work that in and just say these are the Rain Bros.

The shirts are 24.95 from small through XL. You can purchase them at danpatrickt-shirts.com.

What do you think about the nickname and the shirts?