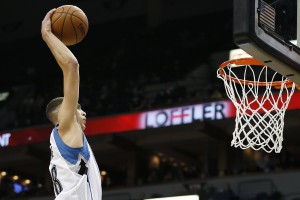 Minnesota Timberwolves guard Zach LaVine (8) takes the ball to the hoop against the Golden State Warriors during the first half of an NBA basketball game Monday, Dec, 8, 2014, in Minneapolis. (AP Photo/Stacy Bengs)