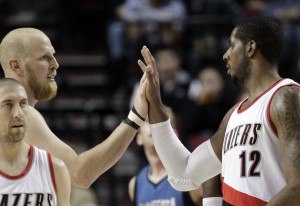 Portland Trail Blazers forward LaMarcus Aldridge, right, is congratulated for scoring by teammate Chris Kaman during the second half of an NBA basketball game against the Minnesota Timberwolves in Portland, Ore., Sunday, Nov. 30, 2014. Aldridge led the Trail Blazers in scoring with 26 points and pulled in 15 rebounds as they beat the Timberwolves 107-93.(AP Photo/Don Ryan)