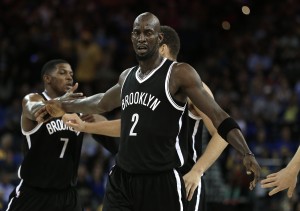 Brooklyn Nets’ Kevin Garnett (2) is congratulated during a timeout after scoring against the Golden State Warriors during the second half of an NBA basketball game Thursday, Nov. 13, 2014, in Oakland, Calif. The Warriors won 107-99. (AP Photo/Ben Margot)