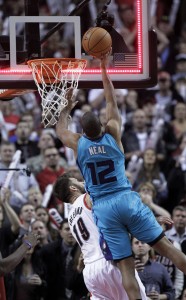 Charlotte Hornets guard Gary Neal, right, shoots against Portland Trail Blazers forward Joel Freeland, from England, just as the buzzer goes off to the second half of an NBA basketball game in Portland, Ore., Tuesday, Nov. 11, 2014. The play was reviewed and ruled no basket, giving the Trail Blazers a 102-100 victory. (AP Photo/Don Ryan)