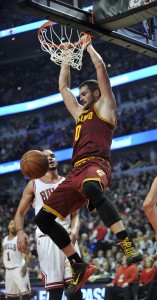 Cleveland Cavaliers’ Kevin Love dunks during the second half of an NBA basketball game against the Chicago Bulls in Chicago, Friday, Oct. 31, 2014. Cleveland won 114-108 in overtime. (AP Photo/Paul Beaty)