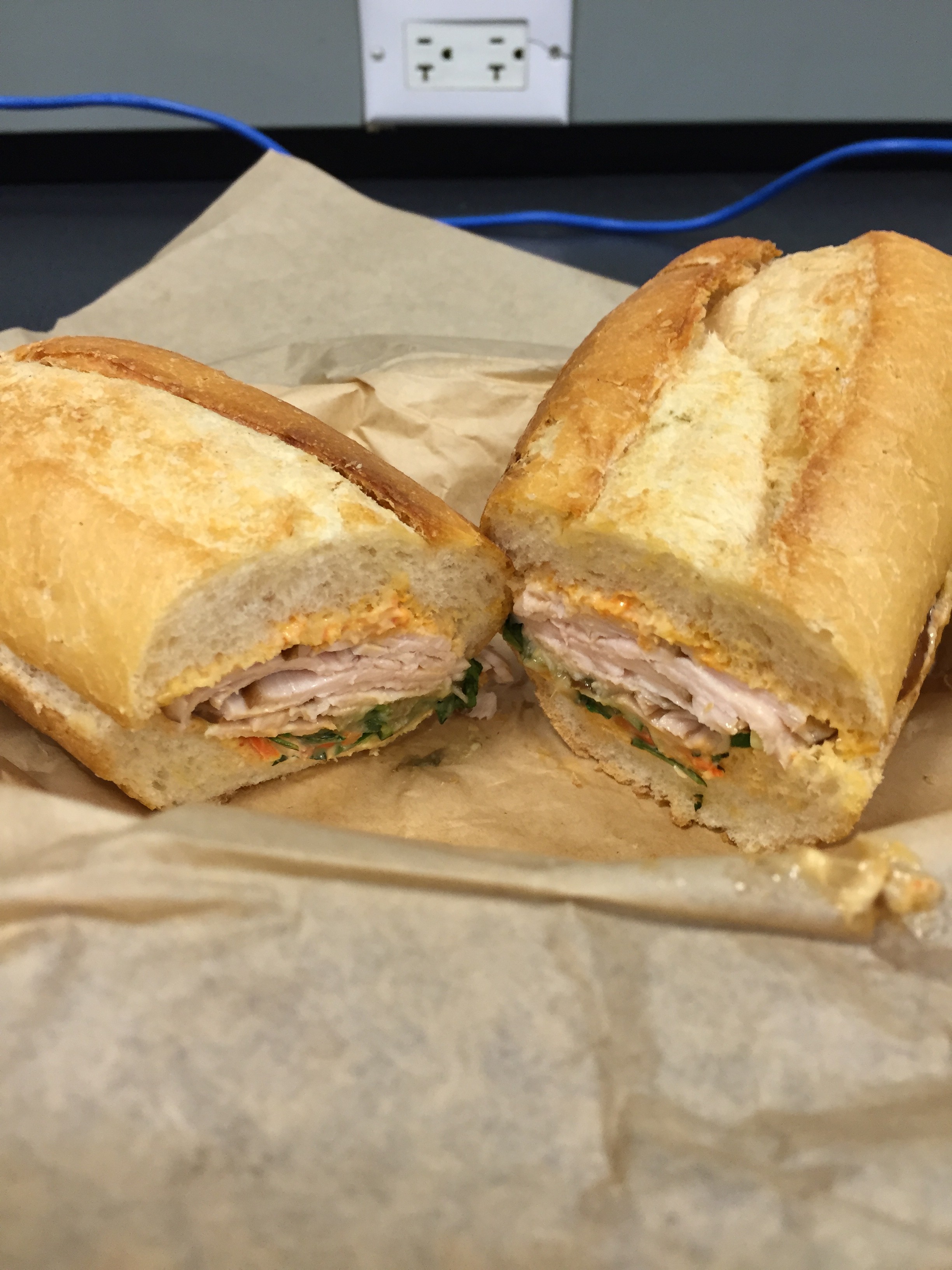 Bunk Sandwiches was one of my go-to’s last season when I was looking for a spot inside the Moda Center to eat last season. Their pork belly cubano is one of the best things you can get.

But of course when I sauntered on over to the 300 level a few weeks ago to try out The Humble Slider, Bunk’s house roasted turkey and avocado bahn mi jumped out off the page.

Bahn Mi’s are MY JAM. I had one last night for my birthday but it was with pulled pork and presented very differently.

For what it’s worth, I enjoyed the sando with the serrano peppers, cilantro and pickled veggie goodness that makes every good bahn mi. And the meat was quality. A turkey bahn mi is a wholly new experience for me as an eater and I can’t say I didn’t enjoy it.

It was good and it was consistent with what I’ve come to expect from the meat at Bunk.

Another part of the sandwich that was enjoyable, at least for me, was the sriracha mayonnaise. The baguette was also an enjoyable amount of crusty and soft, but I thought the mayo was a nice touch and I don’t mind it on Bahn Mi’s in general.

The meat, veggies, sauce and bread were all used pretty well. But I will say that it wasn’t good enough for me to fully convert me from the pork belly cubano or the muffuletta.

The other thing that I loved about Bunk, which may also have to do with the fact that their sandwiches go for 13 dollars at retail, is that there was no line whatsoever. As you know from our experience at Killer Burger on opening night, the lines at the Moda can sometimes be too much. Although the price may be steep, you could reap the non-monetary benefit of comfortably returning to your seat.

Also, the 300-level bar was popping tonight and would most definitely be my spot if I were up there with a group. The view is great, there were a lot of people hanging out and enjoying a good time over their Blazers.

But, back to the mayonnaise.

It was brought to my attention by TrailBlazers.com beat reporter Casey Holdahl that Killer Burger, whom we reviewed last week, does not allow customers to consume their delicious burgers without mayonnaise.

For the record, I didn’t even know that the KB’s burgers even had mayonnaise because it’s so unimportant to the taste of their burgers overall. And I’ve never seen it advertised that all of their burgers have mayo.

We’ll have to look into this more, but this is a concern.

The customer is always right in the United States of America and the Moda Center definitely ain’t Paris.

I’ve never had an issue with Killer Burger and I don’t mind mayo, but people not having the choice about something as simple as adding mayo is a concern.

It’s their dollar. It should be their choice, especially after waiting in line.