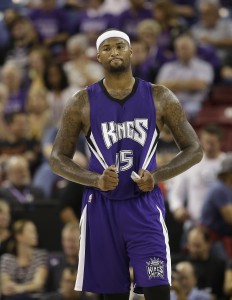 Sacramento Kings stares down the court during the closing moments of the Kings 95-77 loss to the Golden State Warriors in an NBA basketball game in Sacramento, Calif., Wednesday Oct. 29, 2014.(AP Photo/Rich Pedroncelli)