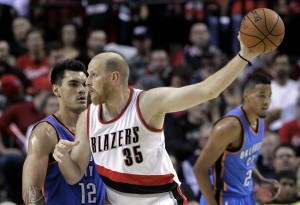 Portland Trail Blazers center Chris Kaman, right, holds the ball out of reach as he looks to pass while Oklahoma City Thunder center Steve Adams, from New Zealand, defends during the first half of an NBA basketball game in Portland, Ore., Wednesday, Oct. 29, 2014.(AP Photo/Don Ryan)