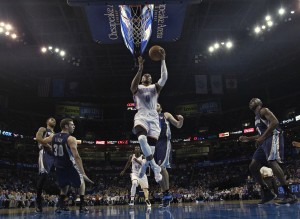 Oklahoma City Thunder guard Russell Westbrook (0) goes up for a shot in the first quarter of an NBA basketball pre-season game against the Memphis Grizzlies in Oklahoma City, Tuesday, Oct. 14, 2014. (AP Photo/Sue Ogrocki)